What better to buy car wipers-frame, frameless or hybrid?

Car wipers (or windshield wipers) are a functional part of the car that must guarantee the driver safety on the road, namely, optimal visibility when driving in the dark and in adverse weather conditions such as rain, snow, fog. Wiper blades wear relatively quickly, so they must be replaced at least once a year.

If you want to buy wipers for cars, please note that first of all they must perform the following functions:

What are the wipers for the car?

By design, the wipers are divided into three types-it is frame wipers, frameless and hybrid.

On the Internet showcase 130.com.ua you can choose by size and buy wipers from well-known manufacturers. For example, the original car wipers Heyner and Alca are produced in accordance with the ISO TS16949 quality standards of the automotive industry and have long earned a good reputation among consumers, as evidenced by many positive reviews.

Frame wipers -the most familiar "classic" the most common type of wipers, most likely because releasing a car off the assembly line, automakers mainly equip it with this kind of wipers, since they are inexpensive and fit all cars. The design of this type of avtodvornikov provides for a metal frame, which is mounted on a rubber wiper.

The advantage of frame wipers is their versatility-they are suitable for cars with fairly flat windshields, and for domestic cars with more convex ones.

The downside is the fact that in winter, when snow or water hits the wipers, their metal construction freezes over and they stop performing their functionality.

Frameless wipers , unlike conventional frame wipers, do not have a metal frame-this function is performed by a flat metal spring that is located inside the rubber body of the janitor. The bend of such a janitor is held by the retainer, and adapts to the bend of the windshield of the car. Due to this design, the wiper moves smoothly and silently, evenly cleaning the glass without stripes and streaks, regardless of the speed of work.

The big advantage of frameless wipers is that they are all-season, they are fully adapted from frostbite in winter, and work in any weather in any conditions.

The only negative-frameless wipers are only suitable for cars with almost flat windshield (almost all modern foreign cars).

Hybrid car wipers design combines elements of frame and frameless wipers, combining lightweight metal frame "dressed" in a rubber case with plastic inserts. Combining the design, they also combine the functionality of the two other types of wipers-they adapt to the shape, fit well and perfectly clean the windshield of the car. Due to this, the hybrid wipers perfectly fulfill their main function-they provide good visibility to the driver and safe movement of the car in any weather.

To sum up, it’s impossible to say for sure that this or that type of car refresher is better or worse-make your choice of janitors at 130.com.ua based on the operating conditions and the shape of the windshield of your car. Janitors to buy in Kharkov, Kiev, Odessa with delivery in Ukraine can be on 130.com.ua. 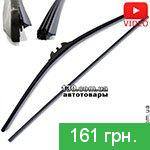 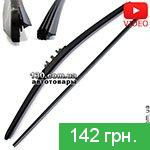 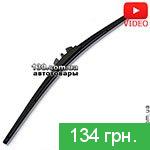 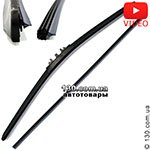 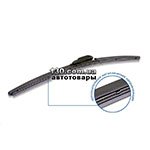 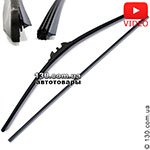 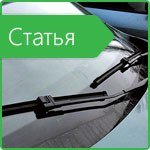 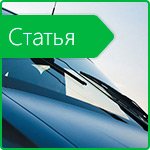 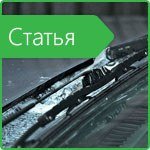