How to determine the polarity of a car battery?

Due to an error when connecting to the car battery on-board network of the vehicle may occur a complete electrical failure. Moreover, this situation is quite common. Even despite the fact that the polarity indicators on batteries, are generally available and well-read, but reverse polarity no one is safe.

To avoid this, we must clearly know how to determine the polarity of the battery? 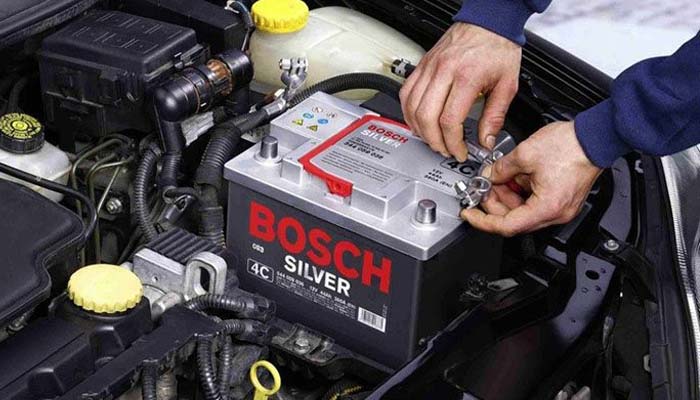 The main causes of incorrect connection or polarity

Polarity, when you connect the battery confuse the "+" and "-" can be a variety of reasons:

Such errors should try to avoid, as incorrect connection of the battery terminals always provokes serious problems in the vehicle electrical system. Therefore, before connecting it is necessary to accurately determine the polarity and follow this very strictly. 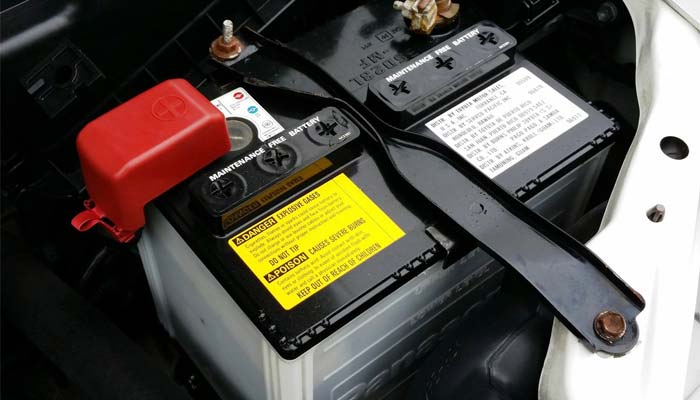 All the modern battery on the body have 2 terminals: plus and minus, near which there are special marks "-" and "+". By international standards, these signs should have relief pursuant to the level even under poor lighting the motorist was able to determine how much contact is connected. In this case, all the batteries depending on the location of the terminals may be two variants of polarity:

In addition, there are some features: the terminals may be disposed within (European execution type) battery housing or protrude above the top of the battery cover (Asian type of execution).

It is also worth considering that in some cars the size of the terminals allow you to connect any battery polarity. Of course, someone might consider a similar versatility big plus, but it is not so. Indeed, in this case, greatly increases the risk of incorrectly install the power supply, which will lead to serious problems. 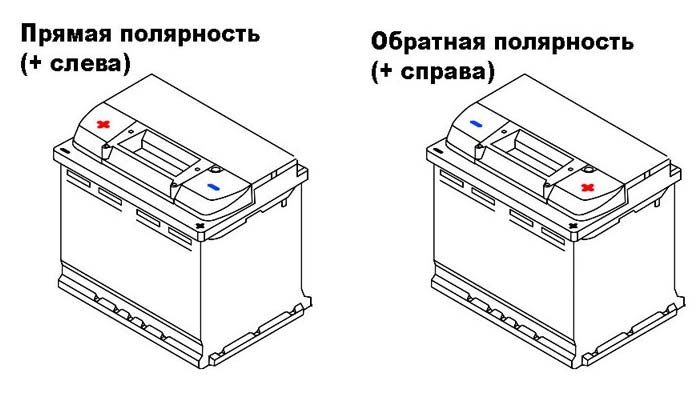 How to determine the polarity, if there is no labeling?

can not be designations that could eventually wear out simply on the old batteries. And not every driver can immediately determine where is above zero, and where the negative terminal. But there are some fairly simple techniques that can be helpful.

Look at the size of the terminal

It's all quite simple, the positive terminal usually has a slightly greater thickness than the negative. If it is difficult to determine visually, you can try to consistently connect the negative contact to the battery terminals (the positive terminal can not touch it, that there is no fault, it is best to isolate it at all). When attempting to connect must look at what the terminal contacts of the battery is worn easily, and on any difficulty or not at all worn. As a general rule, positive due to the fact that it is a little more, there may be some difficulties. However, this method does not give a 100% guarantee. And do not forget about it.

Set polarity, you can use this simple tool such as a multimeter. Suffice it to switch the instrument to the measurement mode DC voltage. Then a black multimeter is connected to a contact pole of the battery, which is believed to have a negative charge. A red - to another terminal. If the device indicates a positive value, approximately 12 V, it can be argued that the assumption was correct. And the black and the contact, however, is connected to a minus, and red - to plus. If the instrument show a value of "-12 V", the opposite is true: the red terminal is connected to the negative terminal, and black, respectively, to the positive 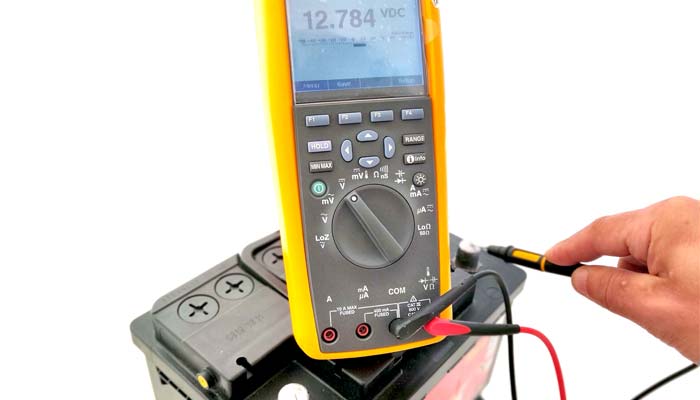 look at the raid on the terminals

It is also not quite accurate method. Rather, an indirect sign that can also help in identifying polarity. Most often rich plaque formed by the oxidation is one terminal with a positive charge. It can take the form of a greenish or white coating.

What happens if the battery is properly connected to the onboard network machines?

Car electrician in his practice often encounter different cases of polarity when you connect the car battery. Most often this occurs because of a banal carelessness or haste of motorists. Consequences of this can be very different, but all of them can not be called pleasant. Let's look at them in more detail.

The failure of the electronic control unit

It is very sensitive to improper wiring of the poles of the engine control unit. If he fails, the car just stops the motor to start. Often, manufacturers use in the control units special protection in the event of malfunction of the electric generator.

The protection is designed as a special stabilizer which is connected in parallel to the power bus. In the event of polarity reversal, when there is a sharp voltage jump in the network, it flies. And then to restore the operability of the control unit is sufficient to replace the stabilizer. In emergency situations, when a replacement is not possible to produce, you can simply remove the stabilizer unit performance will be restored. 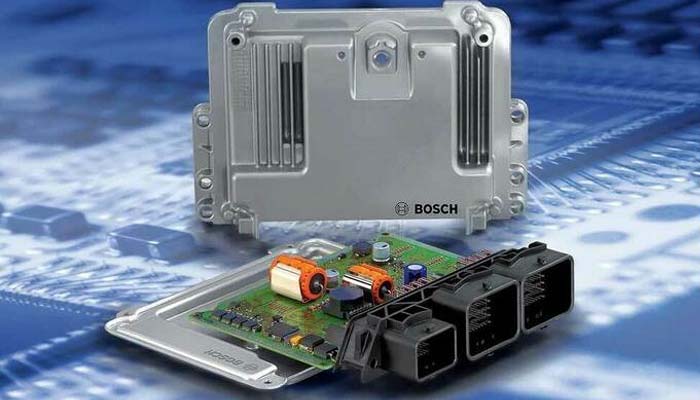 This is a fairly common problem, according to statistics this occurs in 90% of cases. If properly connect the fully charged battery, it can also, together with the failure observed generator and ignition wiring.

In this case, the generator burned two diodes, forming one arm of the bridge rectifier. Sometimes it may simultaneously fire two or even three pairs of diodes. When reverse polarity diodes connected together in a direct sequence, and passes there through a large current. Diodes are not able to sustain it and burn. Such a diode has almost zero resistance. In addition, high current wiring capable of provoking a fire or even cause a failure of the battery.

Some manufacturers in order to avoid such situations in the generator circuit is added a special fuse. But this does not always save, so if the driver made when you connect the battery polarity, it should definitely check out the generator efficiency.

Perhaps this is the most harmless problem. According to statistics, in the operating time will burn about 20% installed in the car fuse. It is therefore important to carefully check all the fuses. Those who burnt necessarily have to be replaced with new similar. 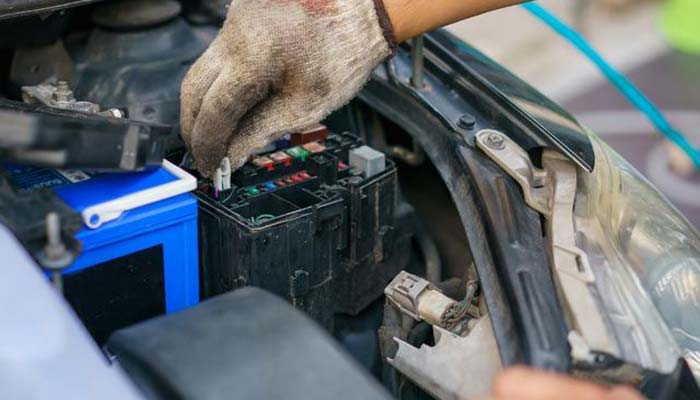 What to do after a reversal?

If the driver still made such an unpleasant situation, and properly connect the battery, after the removal of all breakdowns: generator inspection and replacement of defective fuses must again, this time as much as possible correctly, connect the battery and perform a test engine start.

When the machine is started up, the engine should be allowed to run for a few minutes, and then check whether the generator is not hot. If the temperature greatly increased, it is a sign that was broken diode bridge. This generator needs repair.

If all goes well, then you should also check the performance of basic electrical components and vehicle systems: air conditioning, ABS, lighting, climate control, wiper, radio, etc. If everything is fine, then the problem is fixed, and you can hit the road.

If the polarity battery is out of order, it must be replaced. Restore the operation of such a power supply is unlikely to succeed. In the online store you can 130.com.ua buy car battery low-cost in Kiev, Kharkov and Odessa, with delivery across Ukraine.

Looking for a quality and the best batteries for cars? This rating of batteries for cars is made on the basis of such parameters as: high demand with positive feedback from our customers, high-quality manufacturing — absence of factory defects and service calls, and official warranty and post warranty support in Ukraine. 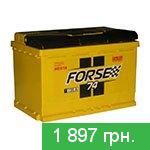 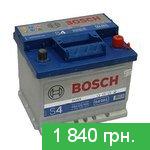 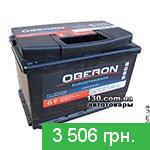 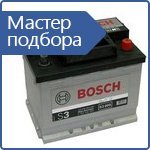 The wizard selection you can easily choose a car battery on key selection criteria such as capacity, starting current, polarity and dimensions of the battery. 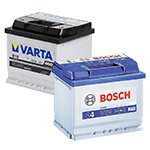 Looking for a truly durable and reliable battery? Tired of doing the next year to change the battery indistinct origin? How much you can suffer with the onset of cold refused battery? If you need a first-class car battery... 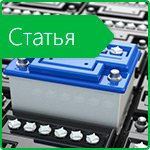 How to choose a car battery

When the cold comes, motorists face many problems: the engine does not start or the car battery is exhausted after a long parking in the cold. Learn how to choose a battery for a car, if the old one can not cope with its task. 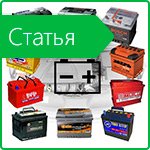 Selecting and storing the battery so it lasts longer

When frosts occur, the chemical processes inside the battery slow down and the overall efficiency of the battery decreases. Learn useful tips in this article on how to store a car battery and how to choose it right. 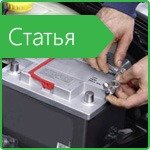 All about gel car batteries 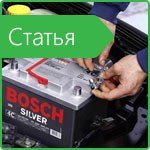 Car batteries - what to choose?

A car battery is the heart of a car and it needs to be maintained in a normal state so that it lives longer. The choice of battery is not an easy task. Varieties of batteries for cars and the features of choosing this device will be discussed in the article